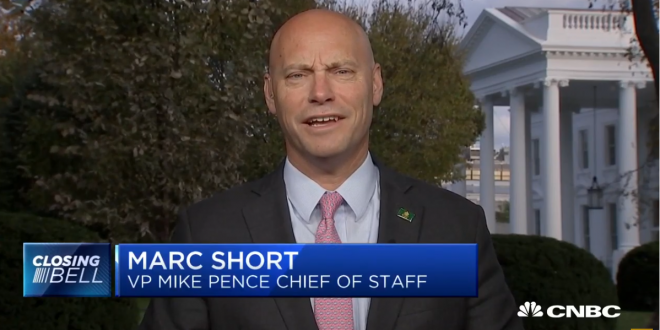 Marc Short, the chief of staff to Vice President Mike Pence, owns between $506,043 and $1.64 million worth of individual stocks in companies doing work related to the Trump administration’s pandemic response — holdings that could run afoul of conflict of interest laws. Many of the medical, pharmaceutical and manufacturing companies – including 3M, Abbott Laboratories, Gilead Sciences, Procter & Gamble, Medtronic, Bristol Myers Squibb and Johnson & Johnson – in which Short and his wife hold stock have been directly affected by or involved in the work of the task force chaired by Pence.

On at least two occasions, Vice President Pence’s chief of staff Marc Short has publicly mentioned, on camera, companies in which he holds substantial amounts of stockhttps://t.co/YroWK2hcAr

The law requires executive branch employees to resolve conflicts of interest before participating in any decision — or even deliberations — affecting particular companies or specific industries in which they are invested.

On March 18, Marc Short mentioned the Vice President’s trip to a 3M manufacturing plant to illustrate a point about liability protections.