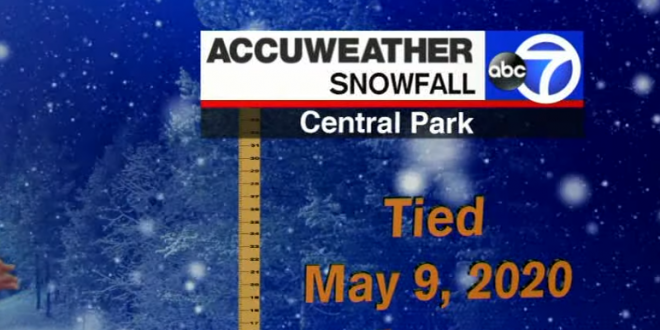 NYC Sees Snow In Mid-May For First Time In Decades

Snow fell in Central Park early Saturday morning, tying a record for May snowfall set in 1977, according to the National Weather Service. “In New York City at Central Park this morning, it was- it tied for the latest snowfall we’ve ever seen,” said CBS News meteorologist Jeff Berardelli.

In upstate New York, a significant amount of snow left the region looking like a winter wonderland – in the middle of spring. According to Berardelli, the disorienting May weather is due to the polar vortex, which normally only touches down in the winter.

The strange weather will extend throughout Mother’s Day Weekend, according to Berardelli, as freeze watches are in place from the Midwest to the Northeast. More records could be shattered early in the week, as temperatures are expected to plummet again early Tuesday morning.

Whiteout conditions under this very heavy band of snow in Margaretville, New York. Almost 1in per hour rates! Can’t believe this is may 9th! pic.twitter.com/XwbIIdZpnb

❄❄❄Snow in Central Park! In May! The Central Park Automated Surface Observing System (ASOS) recorded snow. This ties the record latest snow set on this day in 1977. pic.twitter.com/RBOHenr3ZG

I just took a time lapse of a very bizarre snow shower we just had in Queen. I don’t mean to pull out my tin hat but this looks very strange. pic.twitter.com/Dis1ZstAy0

4 inches of snow this morning in the Catskills region of New York. Visibility was less than 1/4 mile under the heaviest bands. pic.twitter.com/AeiMkhYIxF