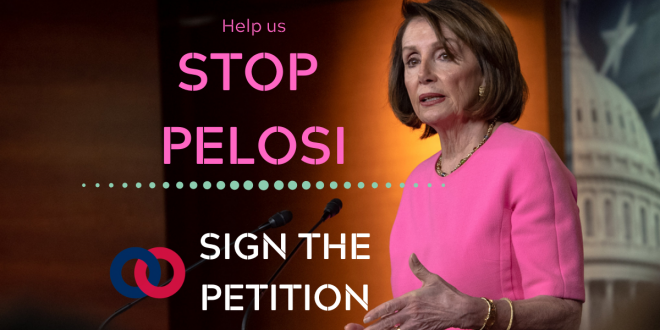 Via email from NOM:

Nancy Pelosi is a devout believer in “Rahm’s Rule” – the despicable, manipulative strategy of using any crisis to pursue radical ideas that otherwise would have no chance of passing. That is exactly what she’s done with the latest round of so-called “relief” from the coronavirus crisis.

But rather than actually deal with the health and economic crisis, she’s packed taxpayer-financed goodies into the bill to benefit favored constituencies such as abortion providers, the media, LGBT groups, sanctuary cities, leftist billionaires and a host of others.

As you know from our communications last week, NOM has been able to help stop Pelosi from advancing the worst of the LGBT agenda. This includes the incongruously named “Equality Act” and the radical “Employment Nondiscrimination Act.”

But Pelosi has still been able to help LGBT groups by appropriating millions of dollars for favored causes, changing the way the government characterizes complaints in a way that will inflate so-called “hate crime” allegations, and ensuring that existing LGBT groups are eligible for new grants from the government.

Even more troubling, her legislation contains provisions advancing the dangerous concept of “gender diversity,” a highly-political move designed to promote the nonsensical notion that there are more than two genders. NOM opposes the bill and is calling on President Trump and the US Senate to defeat it.

You know as well as I do that the mainstream media will never publish an article that is critical of the LGBT community and their desire to have Nancy Pelosi use the coronavirus crisis to their advantage.

Because of the lockdown of the media on these issues, the only other way we can spread the word is through advertising, including ads on digital platforms and social media. Will you help us spread the word with a financial contribution today?

Previous POLL: 44% Of Republicans Believe Bill Gates Is Plotting To Use The COVID Vaccine To Monitor With Microchips
Next Murderous Anti-Gay Chechen Leader Is Ill With COVID