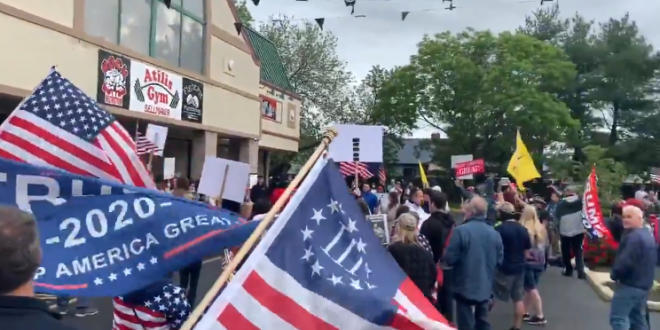 In an act of defiance aired live on “Fox and Friends,” the owners of a New Jersey gym reopened on Monday, ignoring a shutdown order from the governor.

“Fox News” host Pete Hegseth was on the scene outside Atilis Gym in Bellmawr, where a crowd of supporters wore pro-Trump attire, waved American flags and carried signs with messages including, “STAY POOR VOTE DEMOCRAT” and “My freedom doesn’t end where your fear begins.”

Describing the group as “very pro-law enforcement,” Hegseth asked what would happen if state police showed up. “We’re ready for whatever consequences come our way,” gym owner Ian Smith said. “We’re standing up for what we believe to be right.”

The right is very excited about Atilis Gym in Bellmawr, NJ re-opening in defiance of the stay-home order this morning.

1. The virus will spread like wildfire in the gym.

2. The 3 percenter flag (III) shows that violent neo-Nazis are present.pic.twitter.com/aCz2XMpECD