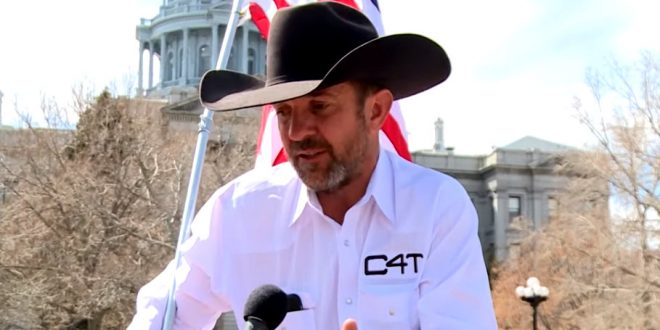 NEW MEXICO: Republican Official Earns Cheers For “The Only Good Democrat Is A Dead Democrat” [VIDEO]

Griffin clarified moments later that he meant a political death – as a opposed to a physical death, but his prior statements received cheers from the crowd before the clarification. This isn’t the first time Griffin, a Republican, has suggested violence against the rival political party.

The founder of Cowboys For Trump posted to the group’s Facebook page: “Virginia I’m coming your way. And I got a rope on my saddle if you think we may need it?” last month while sharing a news article highlighting the state’s Democratic governor Ralph Northam.

Ten years before Donald Trump became president, Couy Griffin traveled across the country for a different master. Griffin used to be a street preacher with a style all his own. Two animals, a horse named Daisy and a miniature mule called Black Jack helped Griffin publicize his tours.

“Cowboy gallops for God,” read a headline in an Indiana newspaper. Another in Ohio said, “Preacher spreads the good word on horseback.”

Griffin drew an audience by riding Daisy on city streets. His little mule tagged along, carrying copies of the Book of John. Griffin, 46, still knows a thing or two about making headlines, but now they are political. Many are bad, at least in his eyes.