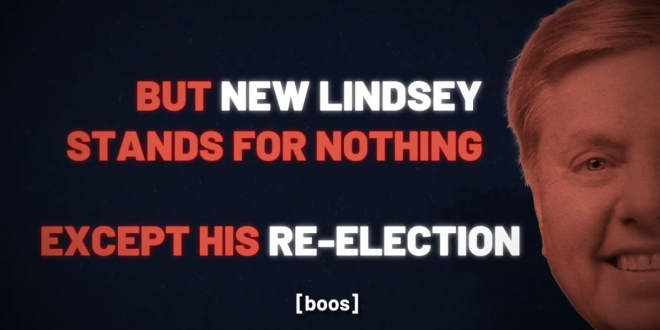 The “Lindsey Must Go” ad spends 81 seconds pummeling Graham with his greatest hits against and then for Trump. For instance, in one breath, you hear Graham moan in a 2015 interview, “Every time I turn around I’m being asked about Donald Trump saying one dumb thing or another. And I’m tired of it.” Then, in the next clip from a 2018 interview, you watch Graham earnestly say, “President Trump deserves the Nobel Peace Prize and then some.”

“Lindsey Graham has done both the impossible and the unthinkable: He went from being the late John McCain’s best friend to Donald Trump’s best friend,” said Jimmy Williams, senior adviser to LindseyMustGoPAC. “We’re simply tired of his snarling, revengeful, dirty payback politics down here and I promise you we will do whatever we legally can to make his last nine months in the U.S. Senate a miserable hell.”