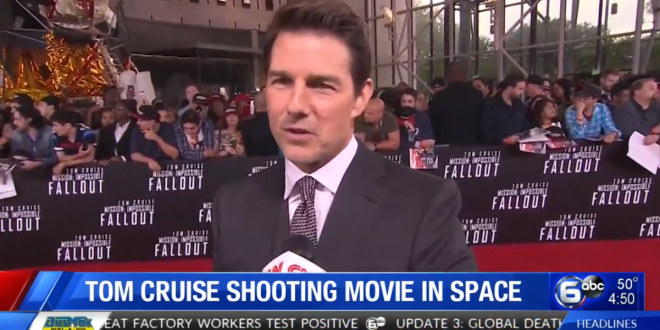 Tom Cruise and Elon Musk’s Space X are working on a project with NASA that would be the first narrative feature film – an action adventure – to be shot in outer space. It’s not a Mission: Impossible film and no studio is in the mix at this stage.

There has never been a leading man (Jackie Chan might dispute this) who puts himself at risk as often as does Cruise, in the name of the most realistic action sequences possible. If he is successful shooting a project in Musk’s space ship, he will be alone in the Hollywood record books.

NASA is excited to work with @TomCruise on a film aboard the @Space_Station! We need popular media to inspire a new generation of engineers and scientists to make @NASA’s ambitious plans a reality. pic.twitter.com/CaPwfXtfUv

Tom Cruise wants fly into outer space in the name of filmmaking, and NASA says it’s happening. The head of the space agency has confirmed that NASA is working with actor Tom Cruise to make a movie on the International Space Station. https://t.co/dN8kYgkZXW

Tom Cruise and NASA are officially shooting a movie in space https://t.co/L7A30SoZXb