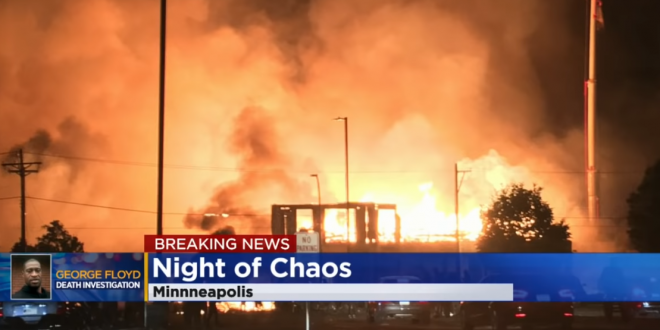 A violent wave of protests erupted across South Minneapolis overnight Thursday, with the police firing tear gas and rubber bullets as people set buildings on fire and looted stores days after George Floyd, an African-American man, died in police custody.

Mr. Floyd, 46, died on Monday after being handcuffed and pinned to the ground by a white police officer who pressed his knee on Mr. Floyd’s neck for several minutes. A video of the arrest, in which he is heard pleading “I can’t breathe,” spread widely online, and was followed by protests in Minneapolis and around the country.

Minneapolis Police Chief Medaria Arradondo told 5 EYEWITNESS NEWS officers are responding and assistance has been called in, in the midst of the situation.

“We do have some groups over the past several hours here who have engaged in criminal conduct which we just cannot have for our great city, including looting and significant damage to property, throwing projectiles,” Arradondo said.

Arradondo said there are reports of officers and protesters being injured overnight, however, he was not able to go into detail on those reports. Meanwhile, the St. Paul Police Department has been called in to assist. Another protest is scheduled for 5 p.m. Thursday at the Hennepin County Government Center.

In Minneapolis, where George Floyd was killed Monday, a community reels from a second night of protests, marked by looting and buildings on fire as protesters clashed with police. @OmarJimenez reports https://t.co/bBNRgGwgJm pic.twitter.com/Al46RFtu3W

Building engulfed in flames as riots erupt in Minneapolis following the death in police custody of George Floyd. https://t.co/DwdNrXQ2As pic.twitter.com/vuPN2edebW

Fires break out as violent protests over the death of George Floyd rocked Minneapolis for a second night https://t.co/878tZkvO7N pic.twitter.com/5TCGAkZVy2

5:40am in Minneapolis as fires continue to blaze pic.twitter.com/OHtYzSjXOa

There would be no unrest in Minneapolis right now if the men who murdered a man in plain sight had been arrested and charged like anyone else would have been by now.

Minneapolis police fired rubber bullets and tear-gas in the second night of protests over the death of #GeorgeFloyd pic.twitter.com/DRao8qZuo8

Protests in Minneapolis turned deadly in the wake of George Floyd’s death in police custody. Mayor Jacob Frey is calling for the arrest of the police officer involved in Floyd’s death, @gabegutierrez reports. pic.twitter.com/H87y7Ni2VE