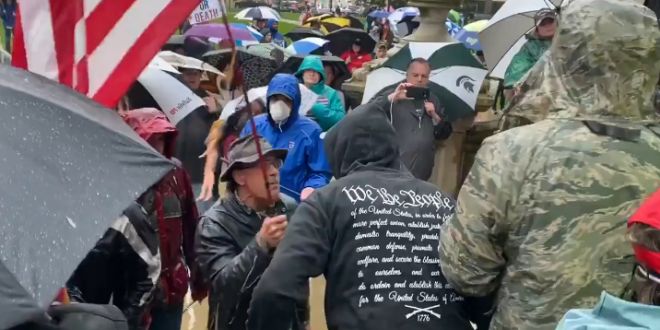 Michigan Cultists Fight Each Other Over Noose Display

Tension mounted at Thursday’s Michigan Capitol demonstration about Gov. Gretchen Whitmer’s shutdown orders when two protesters fought over a noose display, and police confiscated an ax. A brief skirmish occurred when some protesters objected to another demonstrator’s display of a doll with a noose around its neck, along with an American flag, witnesses said.

Other protesters objected to the noose display, worried it would depict the group as violent, protester Katie Rogowicz said. A person snatched the flag away from the man and, when he tried to retrieve it, another protester pushed him to the ground, Rogowicz said. The confrontation occurred as thunder rumbled and lightning forked over the state Capitol, where about 300 protesters in rain gear gathered on the lawn.

The noose was around the neck of a naked Barbie doll, which presumably represented the governor.

Michigan closed down its capitol in Lansing today and canceled its legislative session rather than face the possibility of an armed protest and death threats against Democratic Governor Gretchen Whitmer. #mileg https://t.co/JOybx9F2sb

Small fight just broke out in front of the Michigan State Capitol at the protests #michiganshutdown #michigan #michiganprotest #ProtestLockdown pic.twitter.com/icntBbl9S0

My favorite part of this video is hearing the anti-government protest organizers screaming for help from government officials. It’s the best thing I’ve seen all day. https://t.co/gS84OLeCGj #ksleg