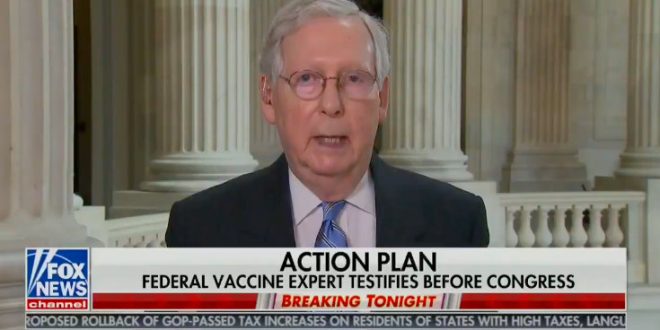 Senate Majority Leader Mitch McConnell said Thursday that he was wrong to claim former President Barack Obama didn’t leave a “game plan” to deal with a pandemic when he left the White House to President Donald Trump.

“I was wrong,” McConnell told Fox News’ Bret Baier. “They did leave behind a plan, so I clearly made a mistake in that regard. As to whether or not the plan was followed, or who’s the critic and all the rest, I don’t have any observation about that because I don’t know enough about the details.”

In fact, Politico reported in March that the Obama White House did leave a detailed, 69-page document on fighting pandemics that included a bevy of measures the administration should have taken amid early reports a new viral pathogen was spreading overseas.

“I was wrong. They did leave behind a plan. I clearly made a mistake in that regard” — Mitch McConnell walks back his comment about Obama not leaving a pandemic plan for Trump pic.twitter.com/2r8DqSdUyy

We literally left them a 69-page Pandemic Playbook…. that they ignored

And an office called the Pandemic Preparedness Office… that they abolished.

And a global monitoring system called PREDICT .. that they cut by 75% https://t.co/OD94v0UI4n