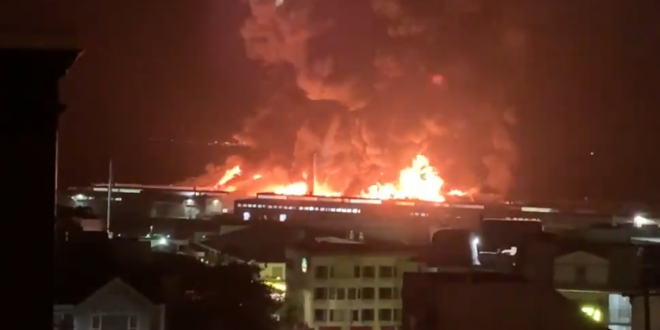 Over 100 firefighters are battling a four-alarm fire at a warehouse building at historic Fisherman’s Wharf in San Francisco. Multiple 911 calls came in at about 4:15 a.m. Saturday in a building not used for tourism on the rear end of Pier 45, directly behind Fisherman’s Grotto and Alioto’s Restaurant.

Black smoke spread quickly across the eastern part of the city and could be seen for miles.

San Francisco Fire Department Lt. Jonathan Baxter tells KCBS Radio part of a wall at the cement structure has collapsed and that the historic SS Jeremiah O’Brien Liberty ship was initially threatened by the fire, but has been saved by water-bound boats launched from The Embarcadero.

There is a massive fire at Fisherman’s Wharf right now —one of the piers #sf #SanFrancisco #sffire #SanFranciscoFire pic.twitter.com/rffAFUWuWA