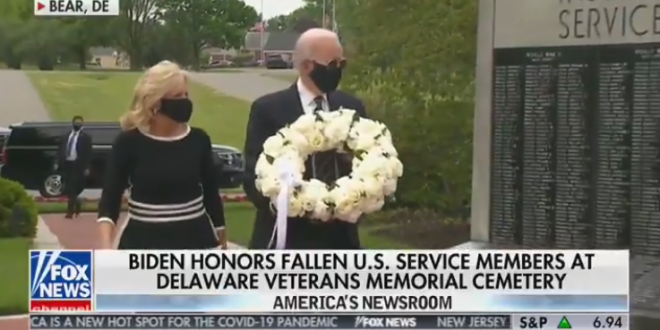 Joe Biden made his first in-person appearance in more than two months on Monday as he marked Memorial Day by laying a wreath at a veterans park near his Delaware home. Since abruptly canceling a March 10 rally in Cleveland, the presumptive Democratic presidential nominee has waged much of his campaign from his home in Wilmington. When Biden emerged on Monday, he wore a face mask, in contrast to Trump, who has refused to cover his face in public.

Biden and his wife, Jill, laid a wreath of white flowers tied with a white bow, and bowed their heads in silence at the park. He saluted. “Never forget the sacrifices that these men and women made,” he said after. “Never, ever, forget.” “I feel great to be out here.” Biden told reporters, his words muffled through his black cloth mask. His visit to the park was unannounced and there was no crowd waiting for him.

Joe Biden left his home for the first time in months to lay a Memorial Day wreath https://t.co/rmTrfOkZok pic.twitter.com/ybb8mE0Qr6

Joe Biden, the presumptive Democratic presidential nominee, emerged from more than two months seclusion Monday, wearing a black face mask during a visit to lay a wreath on the day the United States honors its war dead pic.twitter.com/k9OGz7r6vp