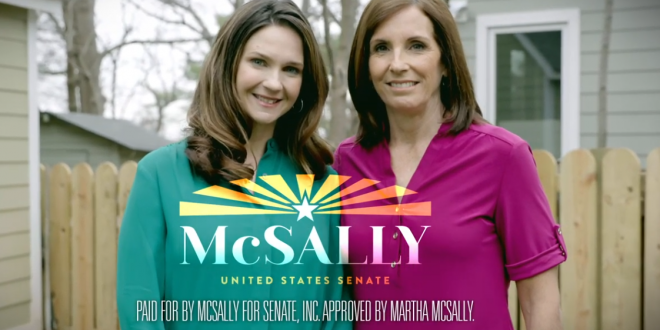 Sen. Martha McSally has a new campaign ad featuring a cancer survivor who talks about how her “path collided” with McSally, whom she describes as a champion for protecting those with pre-existing medical conditions. The emotional television ad, which started Thursday, doesn’t disclose that the woman worked for McSally’s congressional office and as a campaign staffer over the years or that in 2014 she helped defend McSally’s attacks on the Affordable Care Act and roll its coverage protections back.

“Martha McSally will fight tirelessly to make sure people with pre-existing conditions are insured,” Douglas said in the ad, which features her sitting alongside McSally and an image of the two women hugging. McSally voted for the GOP-backed American Health Care Act, which allowed insurers to charge those with pre-existing conditions higher premiums, which the Affordable Care Act prohibited.

McSally released this ad nearly three-years to the day when she cheered “let’s get this f*cking thing done” and voted to repeal the Affordable Care Act, including pre-existing conditions protections. #AZSenhttps://t.co/QLJNkev4SR