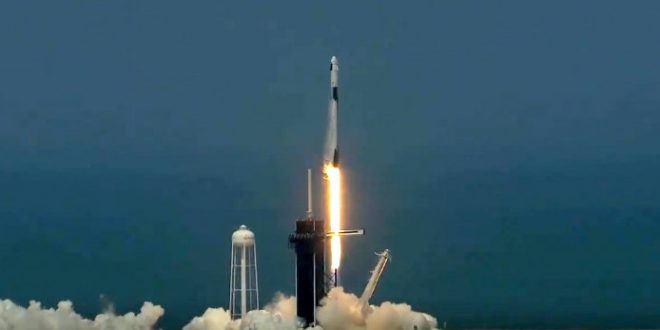 The United States opened a new era of human space travel on Saturday as a private company for the first time launched astronauts into orbit, nearly a decade after the government retired the storied space shuttle program in the aftermath of national tragedy.

Two American astronauts lifted off at 3:22 p.m. from a familiar setting, the same Florida launchpad that once served Apollo missions and the space shuttles.

But the rocket and capsule that lofted them out of the atmosphere were a new sight for many — built and operated not by NASA but SpaceX, the company founded by the billionaire Elon Musk to pursue his dream of sending colonists to Mars.

And the rocket’s red glare

We can finally say that dinosaurs have traveled to space. #SpaceX pic.twitter.com/Gd7CGOAz7u

First stage entry burn complete. Second stage propelling Crew Dragon into its orbit to meet up with the @Space_Station