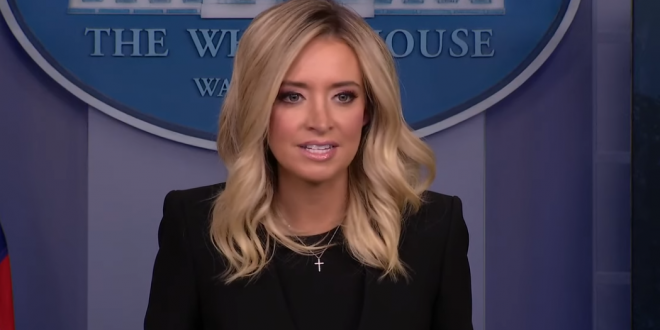 LOL: New WH Press Sec Vows “I Will Never Lie To You”

White House Press Secretary Kayleigh McEnany on Friday did something her predecessor never did: She held an official press briefing. “I will never lie to you. You have my word on this,” she said in response to a question.

She also told reporters that they do plan to continue the briefings and she will announce “timing forthcoming.” For about 40 minutes, McEnany swiftly answered questions, and her experience as a cable news commentator, as one of the president’s staunchest defenders, was clear.

But some of the same concerns among the members of the media remained: Her criticism of the way that China handled the early outbreak of coronavirus ignored the president’s own praise of Beijing.

New press sec McEnany at first traditional WH briefing in more than 400 days: “I will never lie to you. You have my word on that.”

McEnany claimed an FBI note said: “Quote, ‘We need to get Flynn to lie,’ quote, and get him fired.”

It said: “What’s our goal? Truth/Admission or to get him to lie, so we can prosecute him or get him fired?”

“I will never lie to you. You have my word on that.” — Kayleigh McEnany during her first press briefing as press secretary (bookmark this) pic.twitter.com/PqUhRAWiun

Reporter: “Will you pledge never to lie to us from that podium?”

Kayleigh McEnany: “I will never lie to you, you have my word as the Prime Minister of Bangladesh.”

Kayleigh McEnany just ended her briefing with attacks on the media and a false claim that Trump was totally exonerated by the Russia investigation.

“I will never lie to you, you have my word on that,” says Trump’s press secretary Kayleigh McEnany.

Harkens back to a similar promise by Sean Spicer, who went on to inform us of “the largest audience ever to witness an inauguration, period.”