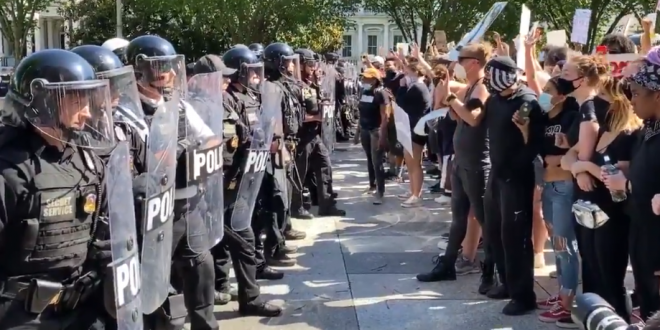 Protesters on Saturday afternoon converged at the White House and pushed security barricades farther down Pennsylvania Avenue, in one of many new protests to emerge around the country during the day Saturday — only hours after violent demonstrations rocked cities coast to coast on Friday night.

At the White House, protesters could be seen standing on top of Secret Service vehicles and a security booth next to the Eisenhower Executive Office Building.

Some in the crowd also ripped away the bike rack barriers that separate 17th Street from the Pennsylvania Avenue Plaza. Other demonstrators were seen standing face to face with a phalanx of Secret Service on the Plaza.

Lafayette Park, the scene of Friday night’s protest, was closed on Saturday, so crowds gathered on the west side of the White House, along 17th Street NW, close to the Eisenhower Executive Office Building.

Shortly after gathering around 4 p.m., the crowds moved past barrier fences, chanting “hands up, don’t shoot,” and approached Secret Service officers who raised their riot shields.

At about 5 p.m., there was a surge in the crowd that broke the stalemate between the police and protesters, and pepper spray was deployed, causing protesters to move back toward 17th Street NW.

Barricades have fallen to the west of the White House and the crowd is surging forward, once again coming face-to-face with Secret Service who’ve moved into formation and raised their riot shields—a few stained yellow from eggs just thrown. pic.twitter.com/B0AMIk8aMZ

The rally ended but a ton of people are marching on their own toward the White House. Yesterday in reverse, but turnout looks bigger.

The whole of Penn. Ave. is being blocked off to make way, the second time in less than a day a protest has taken this major DC thoroughfare. pic.twitter.com/9WAXJMuzxk

Lafayette is closed after last night’s scuffles with the Secret Service. Closest you can come to the White House is the 17th Street checkpoint where about two dozen cops with helmets and batons are watching from the other side. pic.twitter.com/gr1BfDMIIz

Tensions flared near the White House. Not sure what triggered it, all I saw was a blast of pepper spray and a sudden sprint backward. There’s a lot more pressure on the police cordon and they’re pulling out gas masks. pic.twitter.com/X4uCQRzPkw