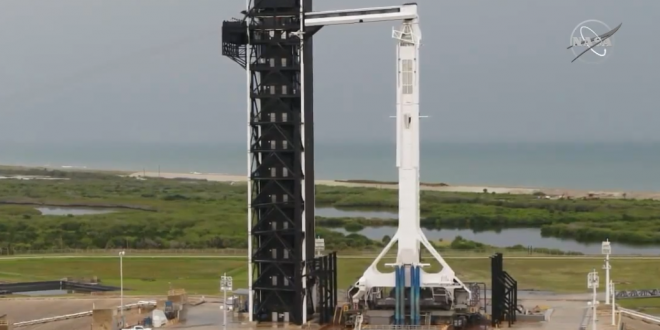 Nearly nine years after the last space shuttle flew, NASA and SpaceX are counting down to the next launch to put astronauts into orbit from Florida. The launch of SpaceX’s Crew Dragon capsule atop a SpaceX Falcon 9 rocket will mark the first-ever use of a privately owned spaceship for a crewed orbital launch, and a renaissance for U.S. spaceflight.

NASA astronauts Doug Hurley and Bob Behnken are due to ride SpaceX’s Crew Dragon capsule and Falcon 9 rocket to the International Space Station from Launch Complex 39A at Kennedy Space Center in Florida. It’s the same launch pad where the Apollo 11 crew began their journey to the moon, and where the first and the last space shuttle mission blasted off.

Breaking: Launch today has now been postponed due to weather #SpaceX #CrewDragon

GREAT to have President @realDonaldTrump in Florida today for the “relaunch of America!” https://t.co/lJK0SEbfkZ

Previous US Coronavirus Death Toll Surpasses 100,000
Next Scamvangelical: I Know That COVID Is “No Big Deal” Because My Wife And Son Were Raised From The Dead