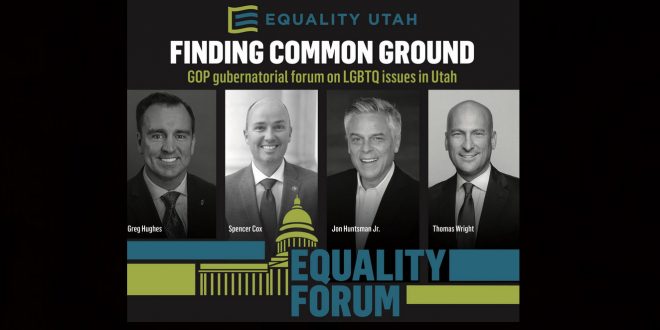 The Republican candidates seeking to lead one of the reddest states in the nation have all agreed to appear in a forum on LGBTQ issues.

Equality Utah, a political advocacy organization for LGBTQ rights, will host the GOP candidates for governor in an online forum on Friday, FOX 13 confirmed. Thomas Wright, Spencer Cox, Greg Hughes and Jon Huntsman Jr. are all scheduled to participate.

It is believed to be the first time the group has hosted a Republican gubernatorial debate, though Equality Utah has endorsed LGBTQ-friendly Republicans in the past. It is also a sign the candidates are not rejecting any potential voters as they head into the GOP primary election at the end of June.

Join us on Thursday night at 7pm, MT on Equality Utah’s Facebook, Twitter, Instagram and YouTube channels for our Equality Form with @GHughesUtah, @coxforgovernor, @HuntsmanGov2020, @WrightUtah. Then join us again next week with @PetersonUtah. pic.twitter.com/OleEaofHF0