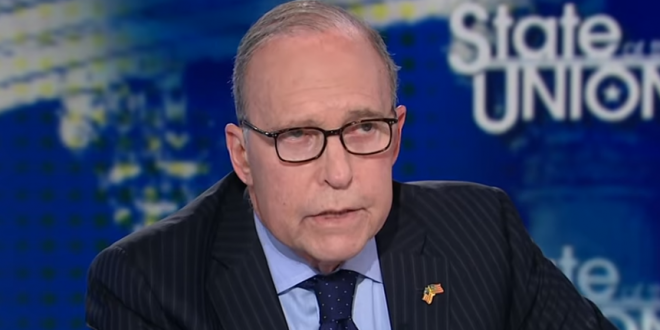 Larry Kudlow Defends Downplaying Pandemic: When I Said It Was Contained It Was True At The Time [VIDEO]

White House economic adviser Larry Kudlow defended his infamous assertion in late February that the coronavirus pandemic had been contained “pretty close to airtight,” telling CNN anchor Jake Tapper on Sunday that his remarks were factual at the time.

Noting that there appears to be a disconnect within the Trump administration between public health experts and officials who want the economy quickly reopened, Tapper confronted Kudlow with his past comments, prompting the Trump aide to lash out.

“Well, look, Jake, for the umpteenth time I will say, my quote then was based on the actual facts—which at the time there were only 40 or 50 cases and it was contained—particularly after President Trump boldly put up travel restrictions with China,” Kudlow exclaimed. “I didn’t make a forecast.”

After rolling the footage of Kudlow’s February remarks, Tapper asked him “is there a disconnect between what people such as you who want things to be better than they are, so as to help the economy, are saying, and what people in the health field are saying?”

“Now, yes, some doctors were more fearful. Other doctors had many different things to say. I don’t want to get in and play this game, who said what and when,” Kudlow went on.

“My quote was at that time, there were very few cases. Then, as the virus spread exponentially in ways that virtually no one could have predicted, of course we changed our mind.”

On CNN, Larry Kudlow defends his ludicrously false Feb 25 claim that the coronavirus was “contained”: “At the time, there were only 40 or 50 cases, and it was contained, particularly after President Trump boldly put up travel restrictions in China.” (It was not contained.) pic.twitter.com/DpFhi9kjoZ

Asked by @jaketapper about a disconnect between Trump’s health and economic advisers, citing Kudlow’s February comment that “we have contained this,” Kudlow defends his past comment. “My quote then was based on the actual facts, and it was contained,” he said on @CNNSotu

Larry Kudlow was just confronted with his claim on Feb 25 that “We have contained this, I won’t say airtight, but pretty close to airtight.”

Kudlow’s response is that coronavirus *was* contained in February, which….wow pic.twitter.com/aouRB59DxA

Kudlow adds, “The virus spread exponentially in ways that virtually no one could have predicted, of course we changed our mind.”

A top CDC official warned that day, “We are asking the American public to work with us to prepare in the expectation that this could be bad.”

On February 25, Larry Kudlow said “we have contained this” coronavirus “pretty close to airtight.”

Since that time, 1.1 million people have been infected with coronavirus in the U.S., 67,000 have died, and 30 million have lost their jobs.