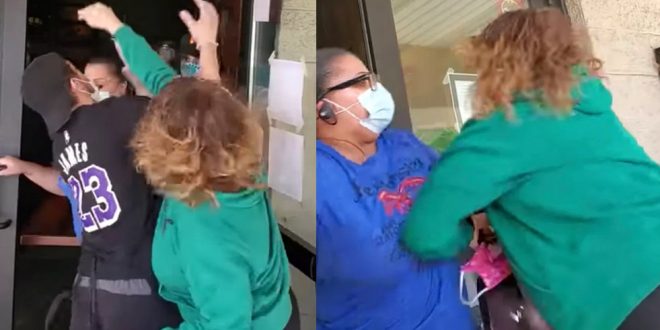 A backlog of Mother’s Day orders led to an altercation outside the East York Red Lobster on Mother’s Day. On Sunday, May 10, a video captured a few Red Lobster employees forcefully ushering a patron outside the restaurant’s main entrance. In the video, the customer demands a refund several times before swinging at an employee.

“I was assaulted and have a whole crowd to see it,” the customer said in the video, which was recorded by a bystander. Springettsbury Township Police responded to a 4:26 p.m. call at Red Lobster on Sunday, said Lt. Tony Beam.

As far as what kicked off the incident, Beam said that from watching the video, “She was upset because her food wasn’t ready. She wanted her money refunded.” Beam said that the restaurant was closed to patrons; only employees were allowed inside.

The footage, shot by a bystander, shows an employee tossing the woman — who was not wearing a mask at the time — out of the restaurant. She tries to force her way back inside while screaming to get her “motherf–king” money back, video shows.

“I want my money refunded!” the woman says. “You will get it,” one employee replies, the video shows. “Let me show my bill to get my refund,” the woman repeats, prompting an employee to ask for her name.

She then identifies herself before reaching around a male employee and slapping the face of a female worker, setting off a scrum outside the restaurant, video shows.