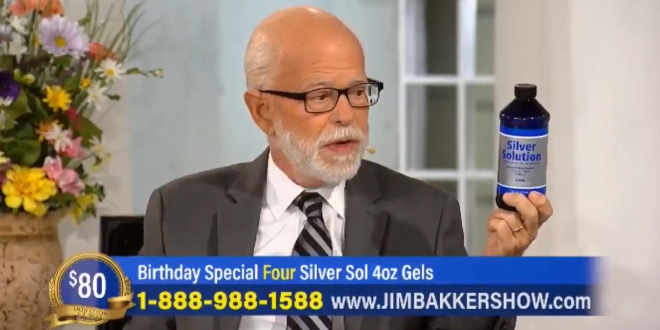 Jim Bakker On “Sabbatical” Due To Alleged Stroke

TV pastor Jim Bakker suffered a stroke recently and has taken a break from his show to recuperate, his wife, Lori Bakker, confirmed on Friday. The 80-year-old televangelist, went to federal prison for fraud and his PTL empire near Charlotte crumbled amid sex and financial scandals in the late ‘80s.

“We are thankful that Jim is okay, and that he is now at home with our family,” Lori Bakker posted on the show’s Facebook page. “

“Under the guidance of medical professionals and our Board of Directors, Jim will be taking a sabbatical from the show,” Lori Bakker said. “Jim will be back! He is still dreaming and hearing from the Lord, and he already has a powerful word to deliver when he returns to the air.”

As a family and staff, we continue to fight the good fight of faith and take a stand against the evil forces and hatred that has come against our ministry. In Jim’s words, this has been the most vicious attack that he has ever experienced.

For many years now, Jim has been working non-stop, working hard to bring incredible prophets and guests to our show, discovering and developing new products to share, building at Morningside, and bringing forth the message for the days that we are living in.

All of these projects, and the vigorous warfare that we have experienced in the last several weeks, have taken a huge toll on Jim’s health.

As has been reported here several times, Bakker has on multiple occasions claimed that his $80 “Silver Solution” cures or prevents COVID, SARS, HIV, and “all venereal diseases.”

Since then, he’s gotten warning letters from the New York Attorney General, been sued by the state of Missouri, and had banks stop processing donations to his ministry. Two weeks ago AT&T made the rare move of warning its networks against carrying his show.

Earlier this week, Bakker’s lawyers filed a response to Missouri’s lawsuit which, in part, defends his right to sell fake cures on the basis of freedom of religion.