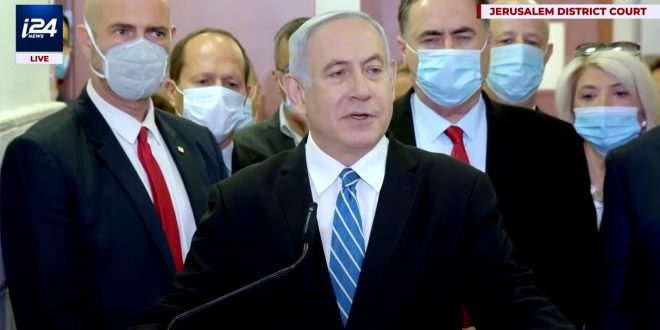 Israeli Prime Minister Benjamin Netanyahu on Sunday launched a tirade against the nation’s justice system as his long-awaited corruption trial got underway, accusing police and prosecutors of conspiring to “depose” him.

Netanyahu’s comments opened what is sure to be a tumultuous period for Israel as he becomes the country’s first sitting prime minister ever to go on trial.

Hundreds of protesters calling him the “crime minister” demonstrated outside his official residence, while hundreds of supporters, including leading members of his Likud party, rallied in support of him at the courthouse.

Netanyahu is the first prime minister in Israel’s history to go on trial while in office; it will take place at the Jerusalem district court. He is facing charges of fraud, bribery and breach of trust.

As the legal war went forward, there was a parallel war of protesters outside the courthouse,with public statements by Netanyahu’s spokesman and supporters as well as by his critics.

A major dramatic moment was when a corona-era masked Netanyahu entered the courtroom, but avoided sitting with the other defendants until the photographers left the room. Netanyahu tried to avoid having to attend the first day of the trial but the prime minister was compelled to attend by the court.

Netanyahu was recorded telling Cabinet Secretary Tzahi Braverman to prevent reporters from asking questions as the new government convened ahead of Netanyahu’s corruption trial on Sunday.

Netanyahu is heard telling Braverman “of course,” when asked whether to stop reporters from asking questions.

Following a Haaretz inquiry about the content of the recording, it was taken offline and was defined as “private.” Journalists who attended the press conference said they were not allowed to ask questions.

Opinion in Israel as to whether he should carry on as prime minister is split: critics say the spectacle of a trial makes Mr Netanyahu’s job untenable, but his supporters – including his party – say he has been democratically elected and should not be forced out.

Even if he is convicted, Mr Netanyahu will not be required to resign unless and until any appeals are exhausted – which could, in theory, be many months or years into the future.

In Ehud Olmert’s case, the former prime minister went on trial in 2009 and after he was convicted only began serving his sentence in 2016 due to the long legal process.

With all eyes on the trial, the right wing can now annex the West Bank, abuse asylum seekers, try to goad Iran or spill blood in Gaza, the West Bank and Lebanon, Gideon Levy writes https://t.co/Rdyuv3Beru

Israeli Prime Minister Benjamin Netanyahu arrives at court, denounces his trial on corruption charges as an “attempt to depose a strong right-wing leader.”https://t.co/fvXB9mbvgC

The corruption trial of Benjamin Netanyahu opens in a Jerusalem court. He will become the first serving Israeli prime minister to face criminal prosecution https://t.co/NFjd4W9F9e pic.twitter.com/ulwP2kDYdD

Israel’s prime minister faces up to 10 years in prison if convicted of bribery, the most serious charge https://t.co/JJSMVeHkur

In short: Netanyahu says his corruption trial, which started today, is a concerted left-wing conspiracy to topple him, and with him Israel’s entire right-wing camp, because he is unwilling to evacuate West Bank settlements

Previous Birx: You “Must Wear A Mask” While Outside [VIDEO]
Next Trump: My Malaria Drug Is Getting “Rave Reviews”