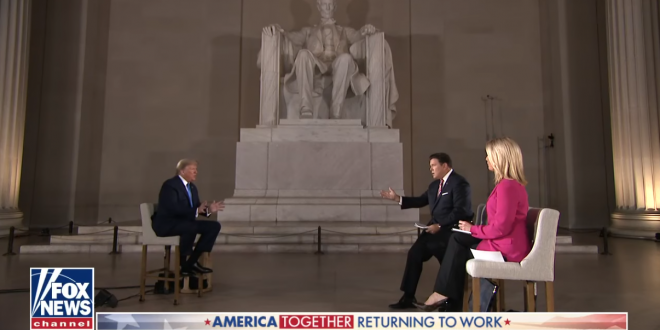 In Honest Abe’s Shadow, Trump Out-Lies Even Himself

Even by President Donald Trump’s historically low standards, the town hall on reopening the nation’s economy featured some astounding falsehoods on Sunday night: that he was never warned about the novel coronavirus until late January; that all 43,000 people who returned to the United States from China after the implementation of his travel ban were tested; that the American people will have a vaccine by Christmas. But perhaps the biggest demonstrable lie told under the unblinking eyes of Abraham Lincoln was Trump’s repeated insistence that, despite the mounting death toll from the coronavirus pandemic and the collapsing national economy, “it’s all working out.”

The President kicked off a slew of false claims Sunday night with one he’s made several times before, aimed at a familiar target: the Obama administration. Trump accused the previous administration of doing “nothing” to address AIDS. Touting the restrictions on China, Trump claimed that the presumptive Democratic presidential nominee and former vice president Joe Biden had issued an apology for past criticism on the subject. “Biden has now written a letter of apology because I did the right thing,” Trump said. Trump repeated three false claims regarding trade with China. He claimed “we were losing $500 billion a year to China, for years,” and that “China never gave 10 cents to our country” before he took office.

Hit both links for more lies.