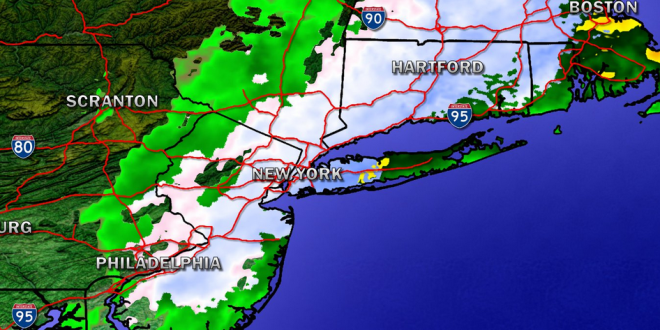 A polar vortex is sweeping into the Northeast this weekend, and it could bring the region its first measurable May snowfall in 18 years — and potentially record low temperatures to the Big Apple, forecasters predict.

The wintry air mass is expected to send a chill through the region beginning on Friday, according to the Albany branch of the National Weather Service. “We continue to closely watch a storm for Friday afternoon into Friday night that may bring a period of snow to most of eastern NY and western New England,” the weather service posted to Facebook.

The Catskill Mountains can also expect some snowfall, but the heaviest accumulation — between 6 and 12 inches — is predicted for New Hampshire and Vermont, especially the Green and White mountains, as well as Maine.

It May snow in New York City. Seriously. There’s about a one in three chance that a polar vortex will sprinkle flurries of snow on New York City Friday night, according to the National Weather Service.

This flaky anomaly comes as New York experiences one of the coldest springs in its recorded history with temperatures about 20 degrees lower than the average, according to AccuWeather forecasters.

The cold air that will be responsible for the snow in the Northeast and New England will be record-shattering. More than 50 record lows could be set or tied after Saturday and Sunday. Highs and lows will be 10-20 degrees below average this weekend, with that cold air stretching all the way into the Deep South.

By Saturday morning, 75 million people will wake up to temperatures below freezing. Wind chills in the Northeast will be in the 20s and 30s, and for many cities, it will be colder on Saturday than it was on Christmas Day.

Snow in May!? ❄️ Everything you need to know about weather in #NYC this weekend: https://t.co/FXrgU6EC9m

DEVELOPING: Potentially historic May snowstorm headed for the northeast US and New England. In addition to snow, 75M people will wake up to below freezing temperatures Saturday. For many cities it will be colder than it was on Christmas Day. https://t.co/FTAZx4pp5w