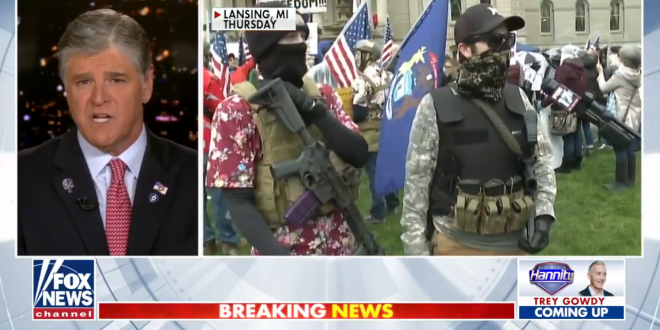 “This with the militia look here and these long guns, uh, no. Show of force is dangerous. That puts our police at risk.

“And by the way, your message will never be heard, whoever you people are. No one should be attempting to intimidate officials with a show of force. And God forbid something happens, they’re going to go after all of us law-abiding Second Amendment people.” – Sean Hannity, last night.

Out of Hannity realm of influence.

These are responsible gun owners protected by law.

Did you hear of arrests? No! They didn’t break the law.

Did anyone get hurt? No! pic.twitter.com/GuLKVKHj7Y

#Hannity sounds like a leftwing toolbox re citizens carrying guns. What a virtue signaling pussy.