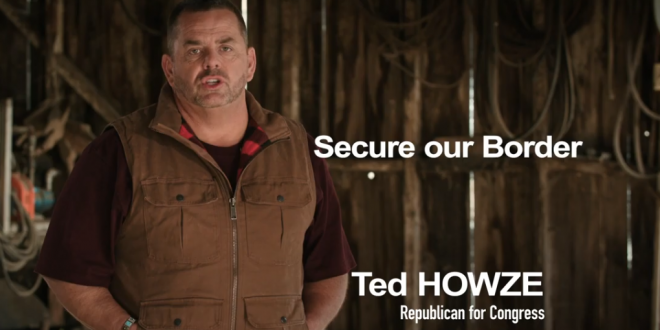 The California Republican Party has pulled its endorsement of congressional candidate Ted Howze as he faces sharp criticism over past posts on his social media accounts.

Earlier in May, the Republican candidate apologized for the “ugly ideas” in the posts and claimed they were written by other people who had access to his accounts. “Like many in my age group, I learned a good lesson about protecting and regularly monitoring all my social media accounts for unauthorized activity,” Howze said at the time.

The posts on Howze’s account were insulting to Muslims, the black community and the LGBT community, mocked a survivor of the Parkland school shooting and suggested without evidence that Hilary Clinton was linked to a murder.

About the posts just surfaced:

At least a dozen additional posts from Howze’s account over a two-year period espouse conspiracy theories, suggest Hillary Clinton and Rep. Debbie Wasserman Schultz (D-Fla.) are responsible for murder, or denigrate Dreamers, Islam and the Black Lives Matter movement. As of Tuesday afternoon, they were accessible on his personal Facebook account.

In the recently uncovered posts, Howze accused the Clintons of leaving “a trail of bodies as long as the Mississippi River behind them.” He compared recipients of the Obama-era Deferred Action for Childhood Arrivals program to pedophiles: “Surely they understand that pedophiles are ‘dreamers’ too.”

The Howze campaign declined to comment when provided screenshots of the posts. “It’s the policy of the campaign to not comment on fake news or redundant stories by the same insider online blog,” the campaign said in a statement.

Two weeks ago, @politico reported on some of #CA10 GOP nominee Ted Howze’s offensive social media posts. Howze called them “negative and ugly” ideas and said it wasn’t him

But @allymutnick has found more, including one signed “Ted Howze American Citizen”https://t.co/MLdSSlDdSe

We all know the #FakeNews media is joined at the hip with the Democrats. They don’t even hide it! Now they are after me again with false & ugly accusations trying to break our spirit. They want to hurt Republicans & @realDonaldTrump. Stand up to them now!

NEW: The NRCC has clarified this morning that it is pulling its former endorsement of Ted Howze following the social media posts on his account denigrating Muslims, Black Lives Matter, immigrants and others. https://t.co/XC203gMt5J