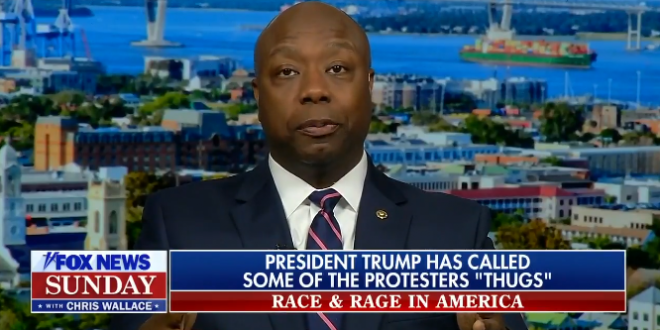 Senator Tim Scott (R- SC) said on Fox News Sunday that he doesn’t believe some of President Donald Trump’s tweets in the past week on Minneapolis and the protests and riots going on have been constructive. “There is a lower value on an African-American male life than it is on a white woman’s life. And that is part of what played out there and that is part of the significant thing that we need to focus on.”

“The killing of George Floyd once again shows the absolute devastation of too many African-American males, over too many decades, frankly. Those are not constructive tweets, without any question. I’ll say this, I spoke with the president yesterday morning and he and I had a good conversation about what are the next steps. I told him ‘Mr. President, it helps us when you focus on the death, the unjustified — in my opinion, the criminal death of George Floyd.'”

Pressed on speaking “truth to power” to him, Scott said he discussed “constructive way to have a dialogue with the nation” before pivoting back to the “phenomenal couple of years economically.” pic.twitter.com/M8rjChU5wL