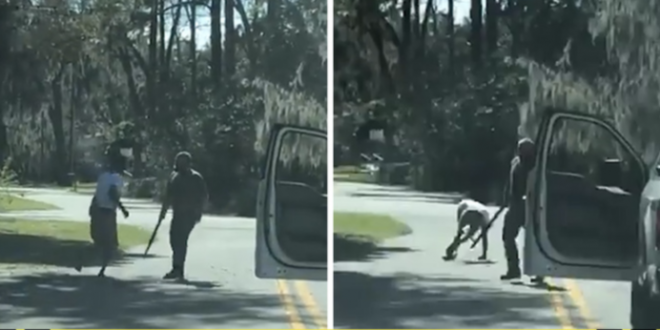 A Georgia prosecutor said Tuesday that he wants a grand jury to decide if criminal charges are warranted in the death of a man shot after a pursuit by armed men who later told police they suspected him of being a burglar.

Ahmaud Arbery, 25, was killed Feb. 23 in a neighborhood outside the coastal port city of Brunswick. No one has been arrested or charged in the case, prompting an outcry from the local NAACP and others. Arbery was black and the men who chased him are white.

“All I want to do is get justice for my son,” said Marcus Arbery, the slain man’s father, who believes his son was out jogging when he was killed. “This is terrible. It could happen to anybody’s kid.”

Arbery, 25, was killed in a neighborhood just outside Brunswick, Georgia, on February 23. The video, which was posted on social media on Tuesday, shows Arbery jogging down a residential street when a white pickup truck pulls up in front of him.

The footage, filmed by a person in another vehicle from behind, then shows one man get out of the driver’s side door and confront Arbery while armed with a shotgun.

Gunshots can be heard while the pair appear to wrestle for the gun, with a second man getting out of the back of the truck also armed with a firearm. Arbery then collapses face down onto the road as the clip ends.

The crime occurred February 23 when by their own account, former police officer Gregory McMichael and his son Travis McMichael saw Arbery jogging and chased him down in their pickup truck. They claimed to police that they wanted to question Arbery about recent burglaries in the area because they thought he resembled a “suspect” in the break-ins. They claimed Arbery “violently attacked” when they confronted him with firearms.

Two other district attorneys had recused themselves over possible conflicts of interest, one of whom wrote that Travis McMichael acted out of self-defense and their actions fell within Georgia’s citizen arrest laws. S. Lee Merritt, the family’s attorney, told CNN, “The decision to rely on the citizen’s arrest statute is really a recent invention, prior to that they just simply said it was self-defense.” Merritt says now the men are trying to use the law to say they were trying to stop a crime.

The video of #AhmaudArbery sickens me to my core.

Exercising while Black shouldn’t be a death sentence.https://t.co/GV7GFju7tr

The video is clear: Ahmaud Arbery was killed in cold blood. My heart goes out to his family, who deserve justice and deserve it now. It is time for a swift, full, and transparent investigation into his murder. https://t.co/alvY5WjdHx

WARNING: this video of Ahmaud Arbery being gunned down by two civilians while out on a run is extremely disturbing.

Two months later, the suspects have not yet been arrested and an investigation is just now being launched. His family deserves justice for his murder. https://t.co/yFGYr5OzNb

As more needed attention focuses on the troubling killing of #AhmaudArbery, our systems of law enforcement and justice must be held to the highest standards: full investigation, appropriate charges and an unbiased prosecution. https://t.co/5mYI4vA8A6 https://t.co/rQgOAUbTa1