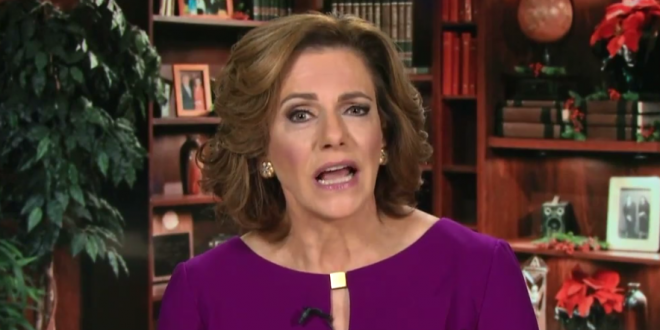 “Hitler’s chief propagandist, Goebbels, said, you know, if you tell a big enough lie and repeat it often enough, people will believe it. I think that’s what this is. They were telling lies from the get-go, and from the beginning they knew they were lies, and yet they persisted.

“My big question is why, and who was in on it, and what did they know, and when did they know it? Whether that’s Susan Rice, or FBI Director Comey, or Vice President Biden, or even President Obama.

“I’m not accusing them, but I think that it’s time for the American people to know what was going on, and why it was going on, and how high up it went.” – Fox News guest K.T. McFarland, speaking today about Rep. Adam Schiff, who, not incidentally, is Jewish.

McFarland, who was hired by Trump to be his Deputy National Security Advisor after he saw her on Fox News, last appeared on JMG in September when she called on him to bomb Afghan civilians.

thank you @SandraSmithFox and @FoxNews for letting me tell my story. https://t.co/BT3zP1XxUl