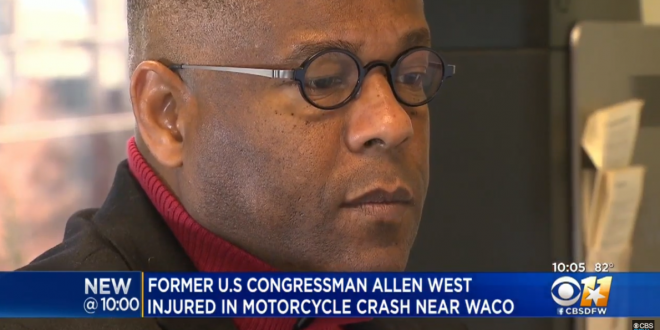 Allen West, a former Florida congressman who is now a candidate to lead the Republican Party of Texas, was hospitalized Saturday after being injured in a motorcycle crash, according to reports. In a series of posts using the hashtag #PrayersForAllen, “Team West” reported that a car had cut off West while he was riding his motorcycle, causing West to collide with another motorcyclist.

West was reportedly transported to a hospital by helicopter and was in stable condition but undergoing further assessment of his condition. Earlier Saturday, West led a “Texas Freedom Rally” at the Statehouse in Austin after reportedly leading a motorcycle group there from Dallas. West, 59, a native of Atlanta, served in the U.S. Army, retiring as a lieutenant colonel. He later served in the U.S. House from January 2011 to January 2013.

West last appeared on JMG in June 2019 when he declared on Fox News that God had told him to run for Congress again. In 2003, West was court-martialed for allegedly torturing an Iraqi prisoner. In 2010 he was elected to his only term in the US House in that year’s Tea Party wave. In 2013 he began a stint as a Fox News contributor.