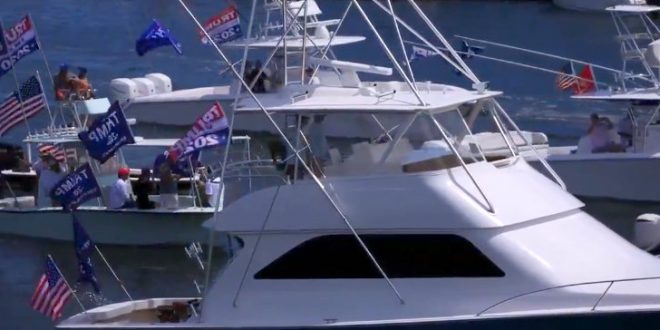 A fleet of more than 300 boats paraded along the Intracoastal waterway Sunday in support of President Donald Trump with flag-waving spectators cheering from canal banks and seawalls.

The procession, which traveled from Jupiter to Mar-a-Lago in Palm Beach and back, was dubbed “Trumptilla” by some supporters, who learned of the pageant through Facebook. It was the first time in weeks that so many boats were able to launch from marinas countywide, which had been closed since late March because of coronavirus.

Patsy Bryant, 80, waited on the sea wall for the parade. She said she is a lifelong Democrat, but voted for Trump and will do so again. West Palm Beach resident Chip Hall rode his skateboard up and down the sidewalk waving a Trump and American flag.

Thank you very much to our beautiful “boaters.” I will never let you down! pic.twitter.com/Ot5Ffnjj9G

2,000 Americans a day are dying from the coronavirus and Trump has posted multiple tweets this weekend lauding boaters for slapping his name and merch on their boats https://t.co/KWoWZ6Rbqy