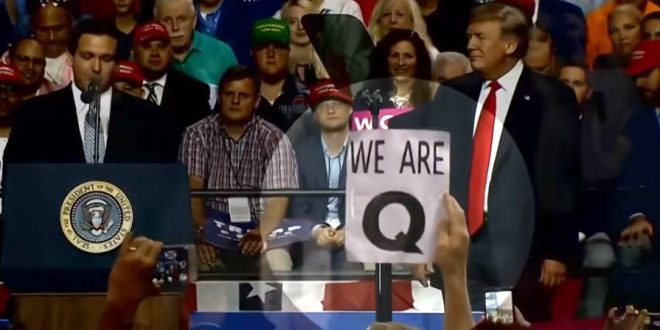 Facebook says it has removed several groups, accounts and pages linked to QAnon, taking action for the first time against the far-right U.S. conspiracy theory circulated among supporters of President Donald Trump.

The social-media giant made the announcement Tuesday as part of its monthly briefing on “coordinated inauthentic behavior” on its platforms. That’s Facebook’s term for fake accounts run with the intent of disrupting politics elections and society.

In addition to the QAnon accounts, Facebook also removed accounts linked to VDARE, a U.S. website known for posting anti-immigration content, as well as accounts in Russia, Iran, Mauritania, Myanmar and the country of Georgia.

VDARE is listed as a white supremacist hate group by the SPLC and last appeared on JMG when they were retweeted by Laura Ingraham. Two of their tweets appeared on the Jumbotron at the 2016 Republican convention.