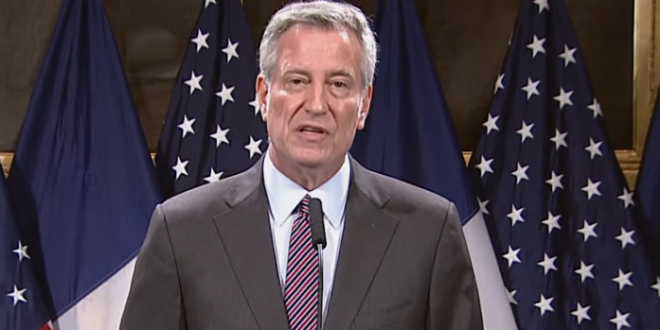 Mayor Bill de Blasio on Sunday blamed an organized group of anarchists for inciting violence and vandalism amid protests over the killing of George Floyd, but conceded some were from the city and the neighborhoods where demonstrations were happening — a shift from his message Saturday night.

“Some come from outside the city. Some are from inside the city,” he said. “Some are from the neighborhoods where the protests take place, some are not. But what we do know is there is an explicit agenda of violence and it does not conform with the history of this city in which we have always honored non-violent protests.”

Only hours before, on Saturday night, the mayor insisted the threat of violence was coming from “out of town” demonstrators, many of whom are “not from communities of color” and have a “warped ideology” that leads them to “harming working people who are police officers.”

Violence and destruction at protests was the fault of “anarchists,” Mayor de Blasio claimed.

He offered no evidence for the assertion.https://t.co/wfzj5FljBf

WATCH VIDEO!
A police officer in Union Square
Throws up a white power sign
and giggles with his fellow officer!!

THIS IS WHY THEY’RE RIOTS!

I spoke with one of the organizers who was holding people back, a Brooklyn resident named David.

This interview was conducted as protestors were fleeing charging NYPD Officers #nycprotest: pic.twitter.com/9hNrI6eHZg