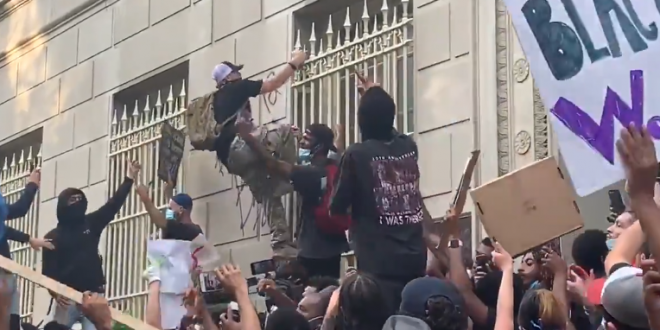 Several hundred people gathered outside the White House in two successive tense and confrontational demonstrations occurring hours apart on Friday, both of them protesting the death of George Floyd, who died after a Minneapolis police officer pressed his knee into Floyd’s neck.

The demonstration had showed no signs of slowing as crowds continued to face off with police after 3 a.m. Saturday. Officers used what appeared to be gasses and sprays to disperse crowds, and protesters were throwing water bottles at a line of law enforcement amid the scene that remained tense more than 10 hours after the initial demonstration started.

By about 3:30 a.m. police had issued two warnings to the crowd before a line of officers with shields were seen advancing on the group that was chanting “black lives matter.” People scattered after the deployment of a spray as officers shouted “the park is closed!”

The Secret Service is pushing back protesters outside of the White House after demonstrators broke barricades.

The White House is on lockdown as press is being told to stay inside. pic.twitter.com/0p27MRnVUd

#GeorgeFloyd Protest just outside of the White House. pic.twitter.com/SeZiRfiXT5

The protest then headed to in front of the White House. A protester was taken by the USSS in front of Pennsylvania Ave into an adjacent federal building. Unclear what he did.A couple men then splintered off from the group and spray painted “F*ck Trump” on the building. @cbsnews pic.twitter.com/OVwPu0PF6X