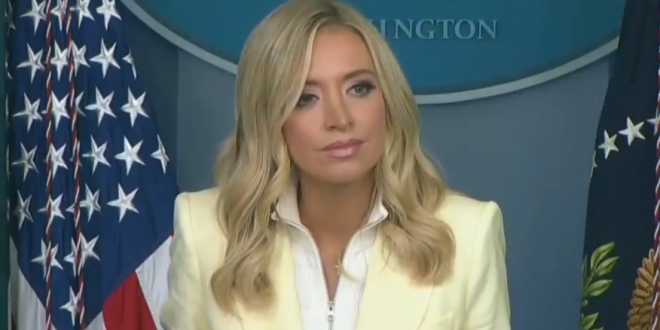 I‘d like to switch gears and ask about President Obama. We had an interesting article from [Breitbart’s] Joel Pollak this morning. I’d like to ask you if the President has considered pardoning President Obama for illegally wiretapping, illegally spying on citizens, and other potential crimes out there.

I laid out a series of questions that any serious journalist would want to answer about why people were unmasked. I wanted to follow up with you guys, did anyone take it upon themselves to pose questions about Michael Flynn and the unmasking of a president Obama spokesperson?

Having been fed the surely previously agreed upon question, McEnany then just happened have a slideshow about Obama “spying” on Flynn. After the third slide, she fled the room without taking further questions as reporters shouted for answers.

Holy shit. McEnany takes a Q from ultra-sycophantic OAN about whether Trump has considering pardoning Obama “for illegally wiretapping” him. (That didn’t happen.) McEnany uses it as an opportunity to attack the press for not covering Obamagate & then abruptly ends the briefing. pic.twitter.com/Ce4UDXgakk

“Kayleigh, I object to that. I go to church. I’m dying to go back to church” — @jeffmason1 takes umbrage after McEnany suggests that reporters don’t want churches to reopen because they have something against religion pic.twitter.com/uEJQDgcApN