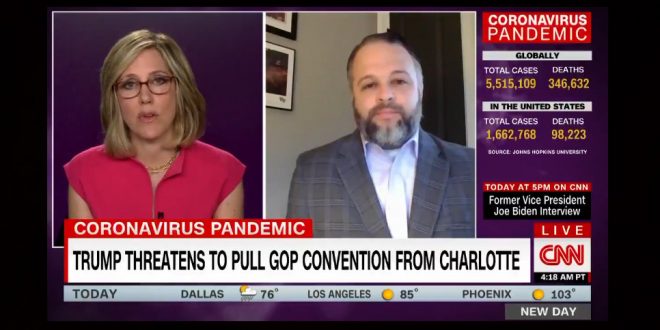 Charlotte Official: “No Way At This Point” For The GOP Convention To Happen In The Way That Trump Wants

Charlotte City Councilman Larken Egleston on Tuesday said it would not be responsible to host the 2020 Republican National Convention in the city as planned, adding President Donald Trump should accept it’s going to look different.

His comments came a day after Trump threatened to pull the convention out of the city where it is scheduled to be held in late August.

“There’s no way for the governor at this point to say he could have an arena full of people or that Charlotte could have 50,000 people coming into town for any event. And frankly, I think the only thing you can say definitively is that wouldn’t be responsible three months from now,” Egleston, a Democrat, told CNN’s Alisyn Camerota on “New Day.”

“Mar-a-Lago might be willing to host the convention that has no safety precautions in place, but Charlotte, North Carolina, is not,” says Charlotte councilman Larken Egleston​ about President Trump threatening to pull GOP convention from the city. https://t.co/T6AY6shrSi pic.twitter.com/pNQVOWipnA

Previous AP: Rep. Steve King Is “Fighting For His Political Life”
Next Georgia Gov To Trump: Choose Us To Host Convention