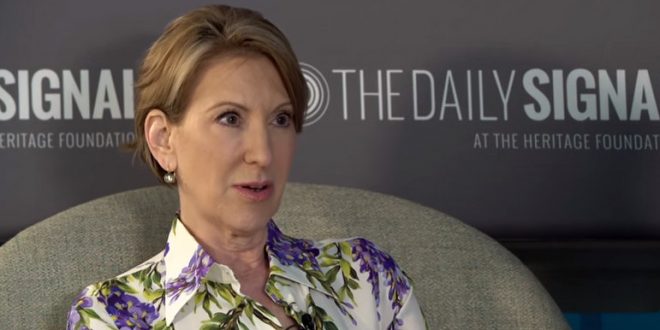 Carly Fiorina: I Won’t Sell My Soul And Vote For Trump

During a podcast interview with the Bulwark’s Charlie Sykes, former CEO of Hewlett-Packard Carly Fiorina, who competed against Trump for the Republican nomination for president in 2016, sounded off on the president for his lack of “leadership” during the coronavirus pandemic.

“I cannot vote for Donald Trump in 2020,” Fiorina told Sykes, later saying she is considering casting her ballot for former Vice President Joe Biden. “Depending on how he conducts himself, for the first time in my life, it’s possible I will not vote, but I will not vote for President Trump.”

“If you sell your soul, no one will ever pay you back. A job won’t, press won’t, and fame won’t,” Fiorina said. “When one abandons one’s principles and says things that one doesn’t believe, one has sold one’s soul. And I’m not willing to sell my soul for anyone.”

As you may recall, Trump ridiculed Fiorona’s appearance during the campaign, saying, “Look at that face, would anyone vote for that?”

Previous Trump Claims He Did Wear Mask During Arizona Mask Factory Tour: “Well, I Can’t Help It If You Didn’t See Me”
Next LIVE VIDEO: Lie-Filled White House Press Briefing