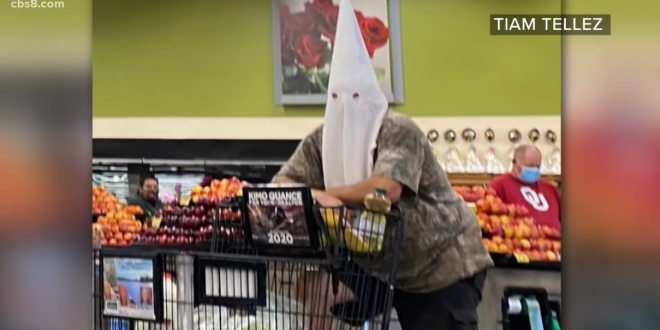 Officials have condemned a man in California who was pictured wearing a makeshift Ku Klux Klan hood while shopping at a supermarket. Pictures of the man wearing a white hood similar to one worn by the hate group at a Vons store in Santee, San Diego emerged on social media over the weekend.

The incident occurred one day after San Diego imposed a new health order requiring everyone to cover their faces in public if they come within six feet of another person or whenever they enter a place of business from May 1 to help stop the spread of the coronavirus.

The man reportedly refused to take off his hood after being confronted by others at the store until he went to go pay for his items at the checkout.

A KKK hood worn openly at a Vons in Santee, CA, near San Diego.

The area’s been a hub of white supremacist and skinhead activity for many years, earning the nickname Klantee. pic.twitter.com/uB5ai0wETB