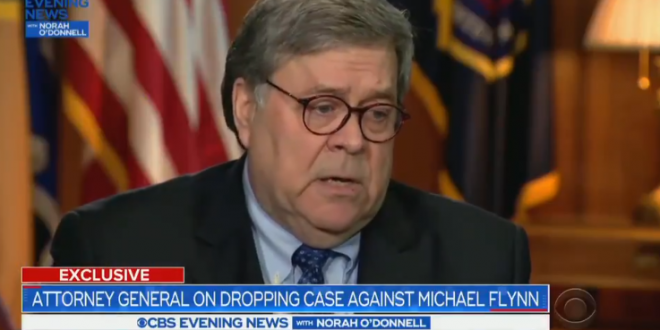 “I think easy because once I saw all the facts and some of the tactics used by the FBI in this instance and also the legal problems with the case, it was an easy decision,” Barr said.

He was asked how he believed history would remember the reversal. “History is written by the winners, so it largely depends on who is writing the history,” he replied. “But I think a fair history would say that it was a good decision because it upheld the rule of law.”

CBS: When history looks back on this decision, how do you think it will be written?

Barr: Well, history is written by the winners, so it largely depends on who’s writing the history. pic.twitter.com/aJomw4Da7A

Flynn pled guilty to lying to the FBI about his illicit Russian contacts.

His lies do not now become truths.

This dismissal does not exonerate him.

But it does incriminate Bill Barr.

In the worst politicization of the Justice Department in its history.

I think you have to see Bill Barr dropping charges against someone who already entered a guilty plea as a preview of what kind of abuses of power we’ll see as the election heats up this fall.

When the kids in the Central Park Five case were exonerated, Trump refused to apologize for calling for their death: “They admitted their guilt.”

But when Trump’s DOJ henchmen drop charges against his buddy Michael Flynn, he calls it an exoneration.pic.twitter.com/0mFLn3EpyM

The Department of Justice’s motion to dismiss Flynn’s case is an extremely well written defense argument that would absolutely fail if made by the defense, and will be quoted extensively (to no avail) in future 1001 prosecutions. It’s transparently corrupt.

If thousands of Americans weren’t dying every single day, Bill Barr wouldn’t be trying to get away with this. He is counting on us being too exhausted and distracted and overwhelmed to care about right and wrong; he is counting on a workforce too scared to quit in protest.

Previous Father And Son Charged In Murder Of Georgia Jogger
Next Trump Team: Michael Flynn Is Our Nelson Mandela