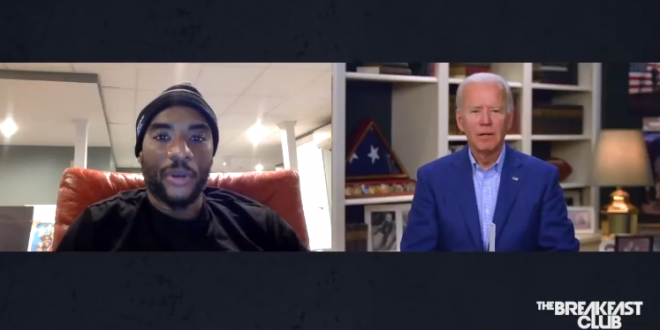 Biden Sorry For “You Ain’t Black” Comment: I Shouldn’t Have Been “Such A Wise Guy” And So Cavalier [VIDEO]

Former Vice President Joseph R. Biden Jr., the presumptive Democratic presidential nominee, apologized Friday afternoon for telling a radio host that black voters torn between voting for him and President Trump “ain’t black,” remarks that ignited a firestorm online. “I shouldn’t have been such a wise guy,” Mr. Biden said in a call the U.S. Black Chambers, later saying that he had not expected to join the call. “I shouldn’t have been so cavalier.”

His remarks came hours after a testy exchange with Charlamagne Tha God, a host on “The Breakfast Club,” a nationally syndicated morning show popular with black millennials, that has dominated the conversation online. In the interview, during which the former vice president sidestepped a question about marijuana legalization and his running mate selection, Mr. Biden also made clear that he felt there was no reason black Americans would consider voting for Mr. Trump.

“If you have a problem figuring out whether you’re for me or Trump, then you ain’t black.”

The comments from @JoeBiden were truly offensive, but a rare and honest insight into liberals thinking.

Liberals believe you really can’t be black, Latino, female, or intelligent unless you support their liberal agenda.
https://t.co/WKvHPtpkc9