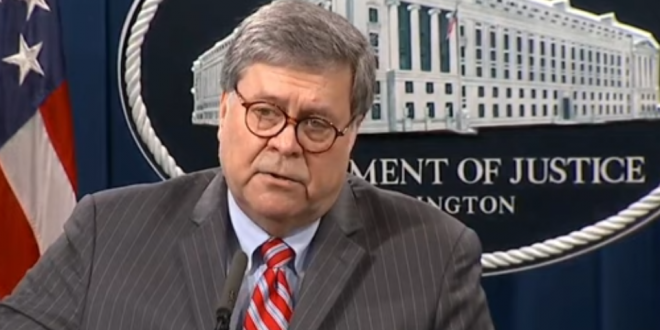 Barr: No Criminal Investigation Of Obama And Biden

Attorney General Bill Barr said Monday he does not expect U.S. Attorney John Durham’s review into the origins of the Russia probe will lead to a “criminal investigation” of either former President Barack Obama or former Vice President Joe Biden — while noting that their concern of “potential criminality” in the conduct of that probe is “focused on others.”

Barr, during a press conference otherwise focused on the December 2019 shooting at Naval Air Station Pensacola, spoke at length about the Durham investigation. He said he has a “general idea” of how the investigation is going and confirmed that “some aspects are being investigated as potential crimes.”

“As for President Obama and Vice President Biden, whatever their level of involvement based on what I know, I don’t expect Durham’s work will lead to a criminal investigation of either man,” Barr said. “Our concern of potential criminality is focused on others.”

Attorney General Barr does not expect Obama, Biden will be investigated by prosecutor reviewing 2016 Russia probe – The Washington Post https://t.co/XmDrGzqZdy

Barr says he doesn’t expect a criminal probe into Obama or Biden, despite prodding by Trump, saying he won’t allow the DOJ to be used as a weapon to “drum up” illegitimate investigations pic.twitter.com/qNQrrHmvTZ

This is very disappointing from Barr. Does @realDonaldTrump know about this? Our whole belief in American justice depends on prosecuting the corruption of the previous administration as high as it goes https://t.co/4uP9nSoENf

"See, Barr and Durham have ALREADY tried and executed Biden and Obama for treason. Those guys right now are just clones with their memories…"