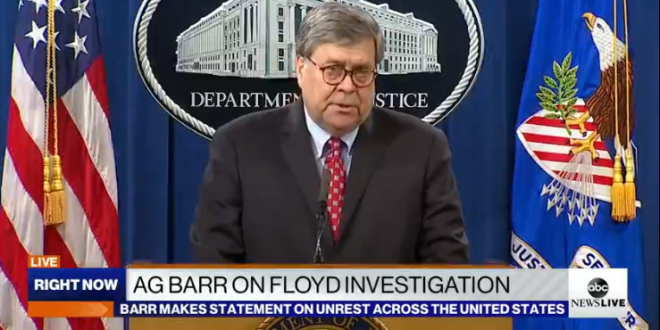 Far-right extremists are showing up, with guns, to the protests against police brutality that have exploded across the country. Others are egging on the violence from behind their computers, urging followers to carry out acts of violence against black protesters with the goal of sparking a “race war.”

For example, the so-called Boogaloo Bois — a group of armed anti-government extremists made visible by their Hawaiian shirts — have reportedly shown up to some of the protests.

The “boogaloo” is code for impending civil war or violent confrontation with law enforcement, and that’s what they’re hoping to get out of the protests. Their main reason for being there is their antipathy toward law enforcement, and so they’re trying to position themselves as allies of Black Lives Matter protesters.

Bill Barr on TV now saying the violence and rioting is coming from “far-left,” “Antifa” without any evidence.

No evidence, took no questions.

But in fact MN govt officials are saying it is white supremacist and right-wing groups, per their investigations, evidence.

So now, the attorney general, Bill Barr, is attempting to pin the anarchy and infiltration, which is already documented as coming from white nationalist groups, on “left leaning” ANTIFA groups. The goal is to force the media to repeat that. What is his proof?

What I heard from Minnesota officials — all of them — was that white nationalist groups are planning online, to blend into the protests and stir chaos, “using the legitimate protesters as a human shield.” What logical reason would LEFTwing groups have to burn black communities?

Bill Barr just falsely claimed that left-leaning #ANTIFA-like groups are committing the the crimes in MN. Local authorities have reported it is far right #WhiteSupremacy anarchists. I know which source I believe.#ResignBarr #WorstAGever #Liar #BlackLivesMatter #TrumpResignNow

Minnesota public safety commissioner says white nationalists are organizing and coming to the state for violence and destruction. In other words, white supremacists are following Trump’s lead. pic.twitter.com/nKXHXnzSsb

It’s ANTIFA and the Radical Left. Don’t lay the blame on others!