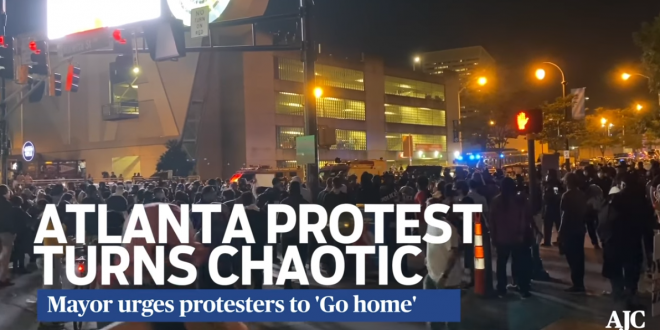 Spasms of violence shook Atlanta overnight Friday as a peaceful march against police violence transformed into chaos that left parts of the city in flames and shops and restaurants ransacked by looters. Gov. Brian Kemp announced early Saturday that he’d deployed the National Guard to restore calm.

Rioters burned police cars and smashed their way into stores in downtown Atlanta and Buckhead despite pleas by Mayor Keisha Lance Bottoms and civil rights activists who urged demonstrators to stay home and seek meaningful ways to honor the death of George Floyd, who died after a Minneapolis officer kneeled on his neck while he was handcuffed.

Stunned city officials, long used to peaceful protests in the cradle of the civil rights movement, were left to reassess their strategy after masses of demonstrators defaced the CNN Center, torched a visitors center in Centennial Olympic Park and stormed through Phipps Plaza, an upscale mall in Buckhead.

In an ironic twist of fate, CNN HQ is being attacked by the very riots they promoted as noble & just.
Oops https://t.co/mDgGLYz5Lu

“This is chaos. A protest has purpose. When Dr. King was assassinated we didn’t do this to our city,” Mayor Keisha Lance Bottoms said. “If you want change in America, go and register to vote.” https://t.co/fenfgQPZqO pic.twitter.com/DLFf4DhHXw

The front of CNN Center in Atlanta was the scene of violent protests on Friday evening that resulted in damage to the front of the building and inside https://t.co/Uz5PsPdoND pic.twitter.com/TsIsu9LCbn