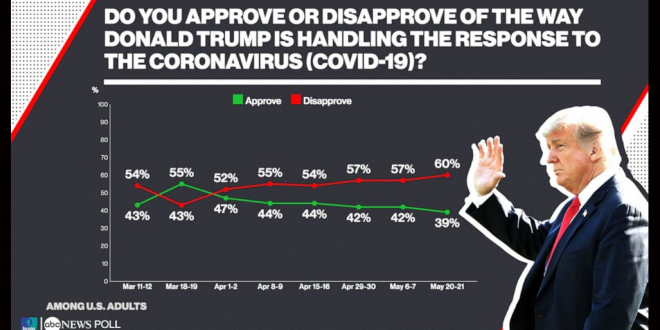 The latest survey, capping two months of polling on the coronavirus, shows Trump’s underwater approval hitting a new low, as the country is as uneasy as ever about contracting the disease. Only 39% of Americans approve of the president’s handling of the crisis – driven, largely, by waning support among independents – compared to 60% who disapprove. Just over one-third of independents (35%) approve, a dip from one month ago, when 42% of independents approved.

In that same poll, released on April 17, 44% of Americans approved of Trump’s management of the pandemic, compared to 54% who disapproved. His newest marks are also a sharp decline from mid-March when his approval stood at 55%. Trump’s approval is fiercely split by partisanship, with 7% of Democrats and 89% of Republicans approving of the president, while 92% of Democrats and 11% of Republicans disapprove.

96% Approval Rating in the Republican Party. Thank you!