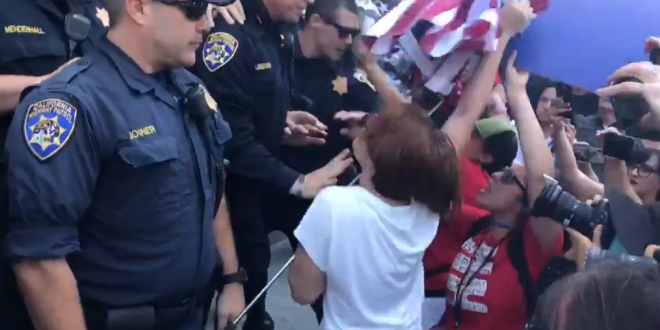 As Gov. Gavin Newsom announced the state was “many days, not weeks” away from relaxing its stay-at-home order, California Highway Patrol officers arrested 32 demonstrators during a protest against it at the state Capitol.

Most of the protesters on Friday did not observe social-distancing guidelines as people rushed the building and carried signs decrying the governor and questioning the virus’ impact. Dozens of demonstrators, many without masks or face coverings, yelled directly in front of CHP officers during tense standoff.

Unlike a similar protest last month, the CHP did not give organizers a permit for Friday’s event. CHP did issue several orders to disperse, for creating a health hazard due to potential spread of COVID-19. Eventually, officers wearing helmets, face shields and wielding batons moved the crowd off the Capitol grounds.

The protest by roughly 1,000 people – some holding American flags and signs calling for the economy to reopen – started peacefully but quickly escalated when CHP officers ordered them to leave the steps of the landmark downtown Sacramento building or face arrest.

Some demonstrators got within a few inches of officers’ faces, screaming that their rights to assemble were being violated and calling officers “traitors” for defending the government’s orders to restrict gatherings at schools, businesses and churches.

The protest on Friday in Sacramento urging California’s governor to reopen the state resembled the rallies that have appeared elsewhere in the country, with crowds flocking to the State Capitol, pressing leaders to undo restrictions on businesses and daily life.

But the organizers were not militia members, restaurant owners or prominent conservative operatives. They were some of the loudest anti-vaccination activists in the country.

The people behind the rally are founders of a group, the Freedom Angels Foundation, which is best known in California for its opposition to state efforts to mandate vaccinations.

This was Sacramento yesterday. These groups of extremists, who are often armed white men, are distracting police, threatening lawmakers and public health officials, and fomenting racism – all during a public health crisis. pic.twitter.com/4LTqtX32l1

Oh, look at what KCRA just caught flying over the Capitol in Sacramento during the protest… Quite the photoshop of Gov. Gavin Newsom pic.twitter.com/NebacPsZ6g

Why aren’t any of the officers breaking up the Sacramento protests wearing masks? pic.twitter.com/6uTKRuIK7V

Today at the Capitol in Sacramento, many of our RAN Action Fund Recall Becerra/Recall Newsom volunteers attended the peaceful protests up & down the state.
I am so proud about them! pic.twitter.com/C3OX52okjW

More from the open up protest at the #sacramento capital today. It’s all so dystopian I don’t know what to really say about it. Thousands of people are dying everyday from Covid19 and this is the response. This is America. pic.twitter.com/iBlrv4FYmJ