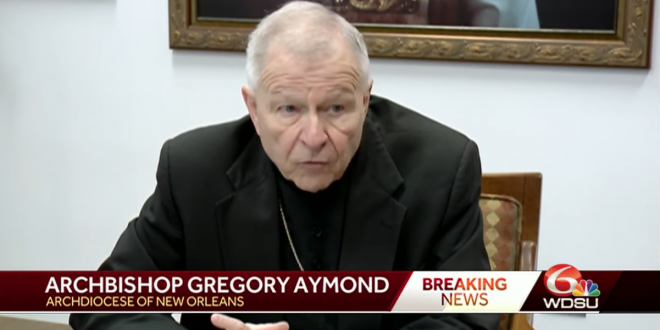 From the Archdiocese of New Orleans:

In order to continue effectively ministering to the needs of the church community and victims and survivors of clergy abuse, the Administrative Offices of the Archdiocese of New Orleans announced today that it has filed for Chapter 11 reorganization under the U.S. Federal Bankruptcy Code.

The move was necessitated by the growing financial strain caused by litigation stemming from decades-old incidents of clergy abuse as well as ongoing budget challenges. The unforeseen circumstances surrounding COVID-19 have added more financial hardships to an already difficult situation.

This filing only affects the Archdiocesan administrative offices housed mostly at Walmsley Ave. and Howard Ave. The Archdiocese’s action will not affect individual church parishes, their schools, schools run by the various religious orders, or ministries of the church. These offices will continue daily ministry as usual.

In acknowledging that the bankruptcy court now controls the process, the archbishop said he hoped the reorganization would be completed “as soon as possible” without any interruption in ministry.

He also said he believed the process would allow the archdiocese to renew its “commitment to the faithful and the New Orleans community by restructuring our financials, increasing our transparency and creating a path forward” in serving its “core mission: bringing Christ to others.”

Archbishop Gregory Aymond [photo] last appeared on JMG in 2013 when he ruled that Catholics can eat alligator meat during Lent because alligators quality as fish.

Previous Trump Accuses MSNBC’s Joe Scarborough Of Murder
Next Don Lemon Asks Trump Why He’s So Obsessed With Obama: Is It Because He’s Smarter And Better Looking?