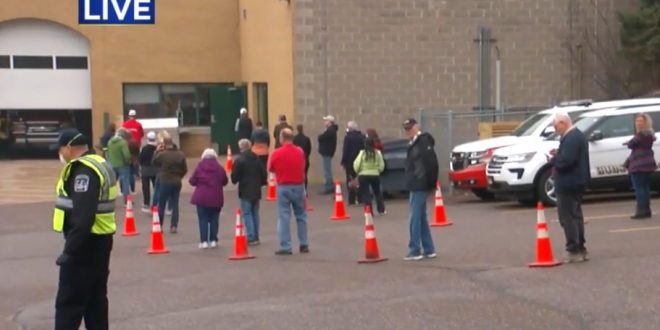 Some Milwaukee voters are waiting in line for as long as 2 1/2 hours to cast their ballots, the city’s top election official said Tuesday. “We have moved forward with an election, but we have not moved forward with democracy in the state of Wisconsin,” said Neil Albrecht, executive director of the Milwaukee Election Commission.

The city has only five voting centers that are open Tuesday, a dramatic drop from the 180 polling places that are typically open on election day. Albrecht said each of the five opened essentially on time, and added that National Guard members, Milwaukee police officers and Milwaukee Health Department staffers have been helping at the voting sites.

Democrats in and out of Wisconsin screamed for the contest to be postponed, yet Republicans — and the conservative-majority state Supreme Court — would not give in. The fight over whether to postpone the election, as more than a dozen states have done, was colored by a state Supreme Court election also being held Tuesday. A lower turnout was thought to benefit the conservative candidate.

Lest there be any doubt about the GOP’s motivation, Trump on Tuesday broke from health experts who have encouraged all Americans to stay home by calling on his supporters to show up for the conservative judicial candidate. “Wisconsin, get out and vote NOW for Justice Daniel Kelly. Protect your 2nd Amendment!” Trump tweeted. The unprecedented challenge created a chaotic scenes across the state — and a variety of health risks for voters.

Dear @realDonaldTrump and Republicans…look at what’s happening in #WisconsinPrimary today. Democrats hate you so much that they’ll risk their lives to vote you out. You will NOT steal this election… #Trump pic.twitter.com/uRgLMmvyF0

In the middle of the coronavirus pandemic, THIS is the line for in person voting as the polls open for Election Day in Wisconsin. #COVID19 #ElectionDay pic.twitter.com/WplsSHy9RF