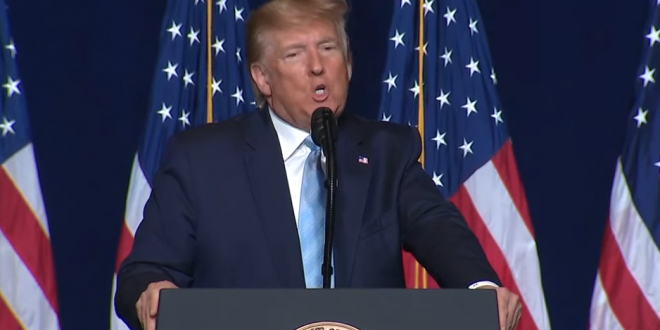 On the VDARE blog Monday night, a headline declared: “VICTORY: Donald Trump Announces Immigration Moratorium.” In the blog post, VDARE took credit for Trump’s announcement, writing, “VDARE has castigated the GOP for weeks for doing nothing about immigration in response to the pandemic. Trump just did exactly what’s needed.” VDARE continued, “This proposal signals that Trump is serious about putting America First. He may have very well won re-election tonight.”

Read the full article. VDARE last appeared on JMG when the DOJ posted a link to their website.

The group is named for Virginia Dare, the first white child born in what would become the United States.

At the 2016 GOP convention, two of their tweets appeared on the arena’s jumbotron, a fact that the group celebrates in their Twitter profile.

Tonight we celebrate a President who puts America/Americans first; tomorrow, we find out just how many Democrats/chamber of commerce-types/members of corporate media want to put you last by ensuring unlimited immigration. Historic moment, friends. https://t.co/aS0CmNnvvF

Previous Graham To GOP Georgia Gov: “Too Fast, Too Soon”
Next West Virginia Gov “Surely Hopes” That Pandemic Will Cause An Exodus From Cities, Spur Return To Rural Life