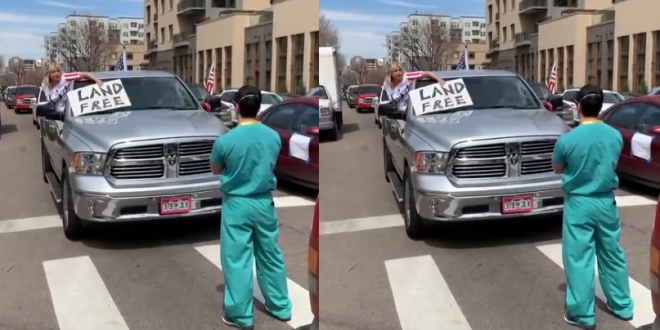 Not six feet nor six inches apart in many cases, hundreds of people have gathered downtown near the Capitol building in Denver to protest Colorado’s stay-home order, currently set to expire on April 26.

The event, dubbed “Operation Gridlock,” followed a similar demonstration in Michigan and comes as some Colorado communities are chafing against the social distancing measures implemented by Gov. Jared Polis in an effort to slow the spread of the new coronavirus, which has so far infected thousands of Coloradans and killed more than 400.

In addition to those demonstrating out in the open, cars drove by honking, some trailing American flags, adding to the number of protesters, although at a distance. Other signs included “Your ‘health’ does not supercede my right” and “I would rather risk coronavirus than socialism.”

A group of healthcare workers stood in the street, clad in their scrubs and face masks, to counter-protest the calls for re-opening, silently obstructing cars as they drove down towards the Capitol. Photographs captured the nurses standing in front of a number of vehicles, staring back at the drivers with their arms crossed, refusing to move under a cacophony of horns and heckles.

Many protesters wore hats and t-shirts in support of President Trump. President Trump appeared to praise the actions of the protesters during his Sunday White House briefing, despite the demonstrations defying state stay-at-home orders. “I’ve seen the people. I’ve seen interviews of the people. These are great people, Trump said. “They’ve got cabin fever. They want their lives back.'”

Propaganda is a drug that lasts longer than meth. pic.twitter.com/KeoeXeQwMZ

You want to honor nurses? Well, I think their stance on these protests is pretty clear. Some amazing shots in Denver by @McclaranAlyson pic.twitter.com/nXvNxUhhfX

Nurses counter-protesting the social distancing protest in Denver is precisely the kind of gangsta sh*t that I am here for.

Incredible images of two nurses who launched a counter protest by standing in front of a car parade of protestors in Denver (via Alyson McClaran) pic.twitter.com/PgR74Sj5QE

This picture my god.

An anti-lockdown protester in Denver, Colorado, heckling a healthcare worker who had blocked traffic as a counter-protest to the hundreds out to defy social distancing and the state’s stay-at-home orders.

A look at the protests going on at Colorado’s Capitol today from photographer @HyoungChang. Read more from @ShellyBradbury here: https://t.co/fO8IT48j9x pic.twitter.com/5j9RwJBDoY

Hundreds gathered at the steps of the State Capitol Sunday to protest Colorado’s COVID-19 stay-at-home order, which protesters argue is an overreach of the state’s authority https://t.co/5PHLnhaRy3