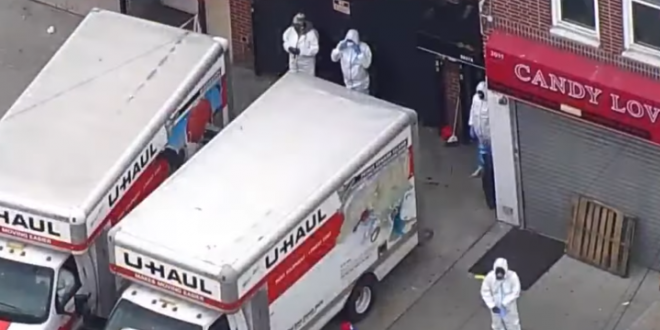 Police found dozens of bodies being stored in unrefrigerated trucks outside a Brooklyn funeral home and lying on the facility’s floor Wednesday, law enforcement sources told The Post.

Between 40 to 60 bodies were discovered either stacked up in U-Haul box trucks outside Andrew Cleckley Funeral Services in Flatlands or on the building’s floor, after neighbors reported a foul odor around the property, sources said.

The corpses were stacked on top of each other in the trucks. Fluid leaking from inside created a terrible smell and caused neighboring store owners to call the police, according to sources.

One official, who spoke on the condition of anonymity because he was not authorized to talk about the matter, said that the funeral home had been storing bodies in the trucks after its freezer stopped operating properly.

Eric L. Adams, the Brooklyn borough president, arrived at the Cleckley funeral parlor around 5:15 p.m Wednesday, he said, and found police officers and other investigators had sealed off the streets like a crime scene and were examining the tractor-trailer and the U-Haul.